Our Drive, Chip and Putt Story 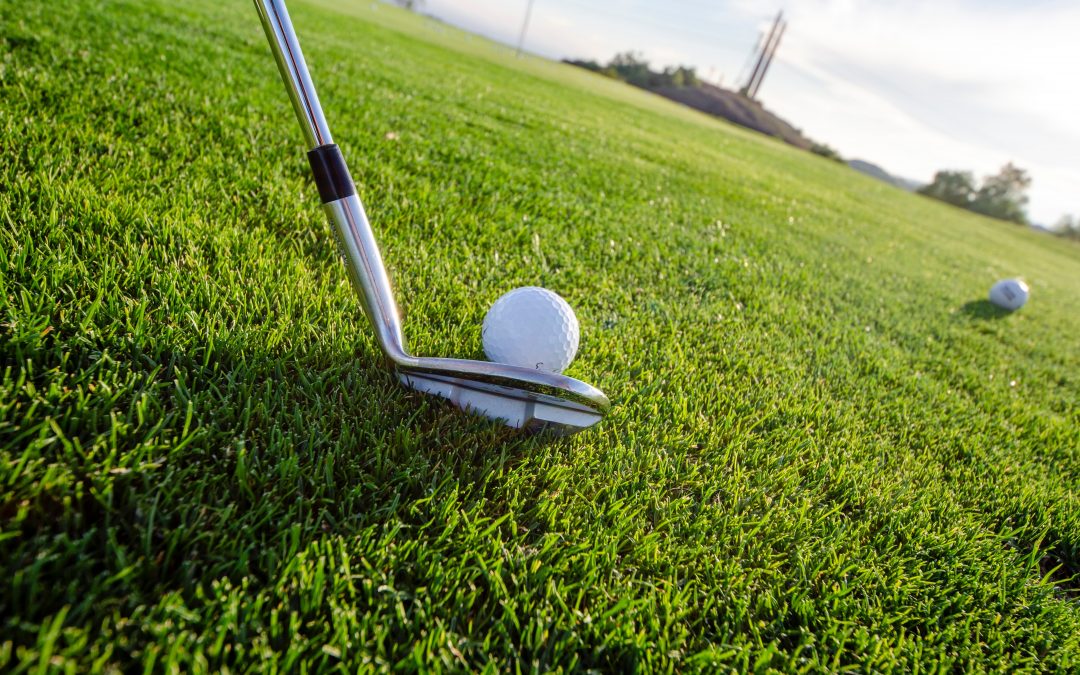 Golf is known for the heartbreaking lows, whirlwind highs, and the days of grinding away while no one else is watching. In some cases it becomes a sport where a literal half an inch can seal the victory — or the defeat.

Nothing illustrates this journey better than the Drive, Chip and Putt competition that takes place each April. And for our son Hamilton, who is a hardcore junior golfer, this competition has represented all the clichés you can think of — the carrot dangling in front of him, the one that got away, the code he couldn’t quite crack. We thought this would always be his Drive, Chip and Putt story.

Until all of the hard work finally paid off.

What is the Drive, Chip and Putt Competition?

Even if you’re not a golfer you are likely familiar with the Masters Tournament hosted at the Augusta National Golf Club every year. It is always held the first full week in April, come rain or shine. Even Easter has to share the spotlight with the tournament some years, as it is truly “a tradition unlike any other.”

In 2013, the Masters Tournament, United States Golf Association and The PGA of America founded the Drive, Chip and Putt competition for kids ages 7 to 15. It is a free competition held at various sites throughout the country with three levels of qualification. For the final 80 kids who make it through the qualifying events, they receive the opportunity to compete at Augusta National the Sunday before The Masters.

Each qualifying event is divided into different age groups, 7-9, 10-11, 12-13, and 14-15. During the qualifiers, each golfer gets nine shots – 3 drives, 3 chips, and 3 putts. Each attempt is given a points value, and the kids with the highest points advance to the next round. Slowly, through all the events, the thousands of kids across the country competing dwindles down to only 80 earning spots to go to compete at Augusta National in the Spring.

When the first competition was held in April of 2014, Hamilton watched the young golfers compete on television and he begged us to sign him up.

Competing for the DCP Each Year 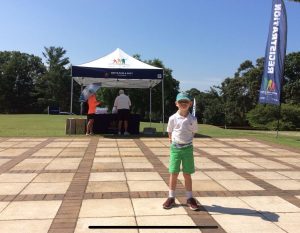 Hamilton participating in his first Drive, Chip and Putt in 2014.

Hamilton was able to participate in the next season of the DCP in Summer of 2014. He was so little we couldn’t find any golf shoes to fit him, but there was no stopping him from trying for the Boys 7-9 qualifier. My husband dutifully drove him an hour away to the Tanglewood golf course in Clemmons, North Carolina.

In my head I had visions of Hamilton being the youngest competitor to advance. I practically had my outfit picked out for the competition the following April to kickoff the Masters.

But sweet little Hamilton was so young and didn’t score high enough to advance to the next qualifier that year.

Or the following year.

In 2016, Hamilton finally scored high enough in the initial qualifying round to advance to the second round. For the first time he saw his name on the leaderboard and he was naturally ecstatic. Later that summer he went on to compete in the second qualifier, only to have his hopes dashed.

The next few years brought more of the same experience. He would make it to the second round but miss advancing by only a few points. And of course one year was canceled altogether because of the pandemic.

By the time the Spring of 2021 rolled around and it was time to enroll in the 2022 registration for DCP, I asked Hamilton if he really wanted to go for it again. After all, this would be the 7th year attempting to qualify. You would think a kid could only handle so many near-misses.

No Time to Quit 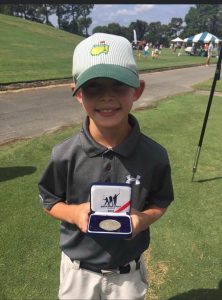 Hamilton at the first sub-regional.

Thankfully he stuck with it. Where I had a hard time seeing past those near-misses, Hamilton used it as fuel to keep the competitive fire burning within him. He was bound and determined this was going to be his year to achieve one of lifelong goals of making it to Augusta National.

The first qualifier was in May of 2021 in Columbia, South Carolina. Hamilton competed alongside his brother Jackson in the 12-13 age division. Although Jackson didn’t advance, he was right there beside Hamilton cheering him on. The top three scores get to move on, and Hamilton was one of the top.

It also bears mentioning this was when we were right in the middle of packing up our house and moving to Augusta. Our life couldn’t have been anymore chaotic, but somehow both the boys still wanted to compete.

Winning this round of qualification took him to the sub-regional qualifier in Columbia later in August, but this time only the top two could advance. Hamilton had never made it past this stage, but he stuck with it, gave it everything he had, and this time his effort was rewarded. He qualified to move on and he had one more extension in his road to Augusta. 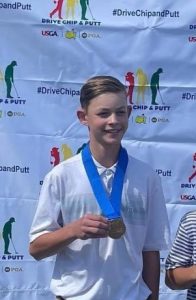 The third and final regional qualifier was held at Quail Hollow golf course, in our old stomping grounds of Charlotte, North Carolina. It was a gorgeous September, early Fall day, but the tension was stifling as he and 11 other boys competed for one spot in his age division. Whoever scored the most points on this beautiful day would also punch their ticket to compete in the DCP at Augusta National next April.

I’m not sure who was more nervous, Hamilton or us, but he stayed calm and focused. You could tell he was trying to drown out the noise around him as he attempted his final nine shots. Would it be enough to finally, after all these years and tears, earn a spot to compete in this elusive competition, or would the pressure be too much?

Thankfully, on this day, his efforts paid off. Hamilton clinched his spot and won by three points. And in true golf fashion, his last putt was within an inch to seal his fate. His dream of one day stepping foot on Augusta National as a competitor, and not a spectator, had finally come to realization.

It’s been a whirlwind since this past weekend at Quail Hollow. The support from the family, friends, coaches, school, and so many others has been overwhelming. It’s so fun watching Jackson and Caroline cheer on their brother and they can see how the hard work is rewarded. And while I know he is proud of himself, it doesn’t touch the amount of joy I feel as his Mama to watch something he has worked so hard towards finally come to some sort of fruition.

I feel like golf is such a tough, lonely sport sometimes. And it’s these rare victories that give these junior golfers just enough encouragement to keep grinding away, day after day.

Now he has six months to prepare for the finals, which will be held on April 3, 2022. There’s so much to do to get ready for the DCP and other tournaments, but oh what a sweet ride! I can’t wait to share more of the journey with you as he prepares for this world-class event.

And one more thing. The next time you have a goal or dream in front of you but you feel like it may not be worth the time and effort to see it through, I hope Hamilton’s story inspires you a little. You never know if the last chance you take is all you need to see your dreams through.