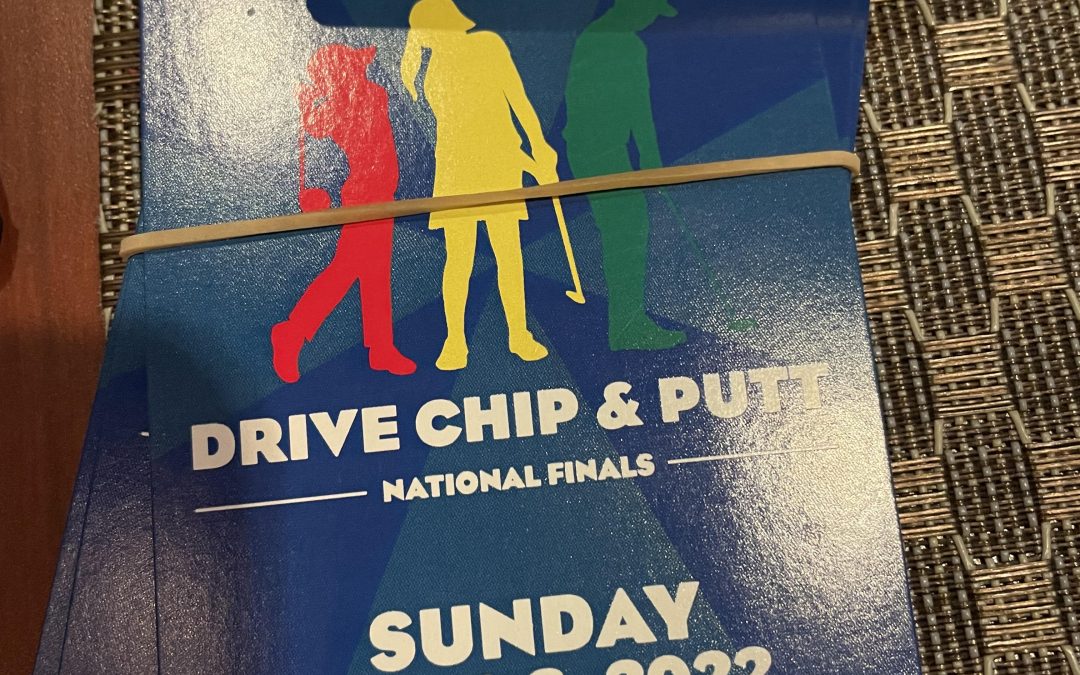 I never could have imagined how magical the week our family had leading up to the 2022 Drive Chip and Putt Nationals Finals.  It was a week you read about in books or you dream about.  To watch your child put everything they have into something and then have them thrive is invigorating.

My son Hamilton has been hitting golf balls since before he could walk.  I used to pick him up and hold him up with my knees and would guide his arms back and forth to emulate the golf swing.  As he started to crawl he would go grab a plastic club, stick or even a back scratcher I used to have so he could bring it over to me for our practice.  I will never forget those big blue eyes staring at me so I could hold him up with my knees.  I would place his hands on the object and I would swing back and forth as we tried to hit a sock, matchbox car, a bottle top, or just anything we could find.

Those little sessions became more and more frequent till he could finally walk.  At that point, anything that would look like a golf club or shaft, he would go pick it up and swing it as hard as he could.  There were times I would have to tell him not to pick up a stick because we were either in his church clothes or I thought he was going to damage something.  He wanted to swing everything he could find.

I will never forget the weekend I went to see my sister in Atlanta and she had some really nice plastic clubs and he took them outside to swing them.  He was 18 months old and then I knew Hamilton had something.  I took many pictures of him actually working on his golf swing that day and I could confidently say his positions were perfect.  Not only was he swinging on a great plane, his tempo was incredible.

Eventually I bought him a real driver, wedge and putter and we would go down to the field near where we lived and we would practice the golf swing.  Then, a few months before he was six years old, I actually took him on the course to see what he could do.  We didn’t keep score but I just wanted to see how well he could hit it.  I was amazed at how pure he hit the ball. He even had a routine which helped him do the same thing over and over.

Introduction to the Drive, Chip and Putt

On Hamilton’s sixth birthday, I took him over to a local golf shop to buy a new set of clubs.  The owner of the golf shop gave him a glove, some tees and a few balls.  We spent an hour there as Hamilton showed off his swing and he neatly put all of his new items in the correct pocket.  The owner of the shop was amazed at how great his golf swing was.  I then let him know that we were going to the course and were going to keep score.

In 2013 Augusta National Golf Club partnered with the USGA and the PGA of America to create the Drive, Chip and Putt competition. I will never forget the announcement and I told Sara and Hamilton we need to figure out how to be a part of it.  Hamilton was 5 when it was announced but I knew it would be exciting to watch Hamilton’s reaction as he watched children on TV from all over the country compete.

It was 2 days after Hamilton’s sixth birthday, on April 6, 2014.  We knew the Drive, Chip and Putt was going to be on in the morning and so we made sure Hamilton was able to watch it.  From the moment it came on Hamilton barely moved or talked the whole time.  He was almost in a trance.

When the DCP was over Hamilton looked at the entire family and said, “That was AWESOME and I want to be there!”  My wife Sara got on the computer that day and signed him up for the local qualifier at Tanglewood Golf Course in Clemmons, NC.  From that day, Hamilton made it one of his main goals to make it to the finals.

Since then, he has worked his tail off to try and get better with all golf skills.  We started going to a local golf professional, Blair Smith, for lessons when he was 7.  Blair really helped him to learn how to fix his swing when he was having issues and work on the basic fundamentals.  Then we joined Northstone Country Club in Huntersville, NC.  We got another teacher, Joe Glass, who helped him get better.  Then in March of 2021 Joe decided he would start working at PXG as a club fitter and recommended a new coach. He told us that Doug Spencer is absolutely the best, so we made the transition to a new coach.

Joe Glass was absolutely correct.  It was a game changer in a sense. We have been thrilled with Doug’s coaching at the Spencer Golf Academy. Hamilton went from being a 2 handicap to being a +3.2 handicap in a year.

Meanwhile, through the years Hamilton has made multiple attempts to make it through the DCP finals. He made it to the sub-Regionals twice but 2021 was going to be Hamilton’s year.

He breezed by the local and the sub-Regional qualifier and then it was time for the regional qualifier at Quail Hollow. On September 25, 2021 After a chip-in, Hamilton was in the lead heading into the putting portion.  It came down to the final putt and Hammy thought he didn’t hit it hard enough.  When you hear people say that golf is a game of inches, it holds true in Hamilton’s regional qualifier.  If Hamilton was an inch shorter in the last putt, Hamilton would have had to go to a playoff.

In September 2021, it came down to one inch, but it was enough to earn him a ticket for the finals at the Augusta National Golf Club.

Up next: I talk about the weeks leading up to the April 3, 2022 Drive, Chip and Putt National Finals and the incredible experience of the entire Masters week.