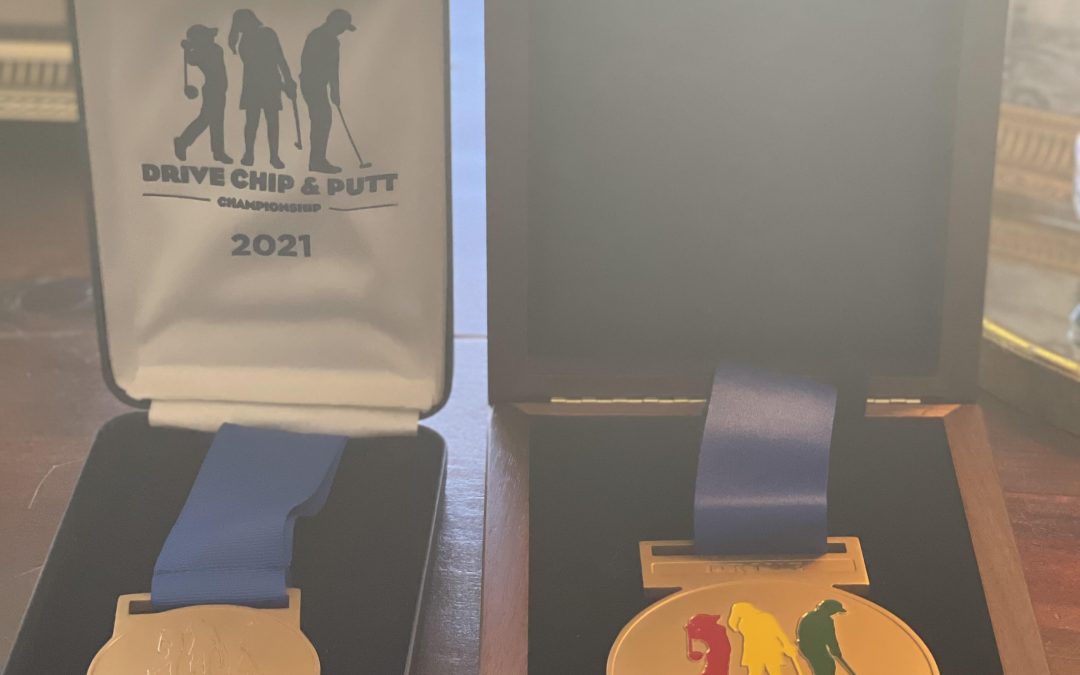 I shared our experience leading up to April 3rd, 2022 and our Drive, Chip and Putt experience in Part 1 here, and I’m excited to share Part 2 with you today.

Two weeks leading up to the finals the week of Masters was when the fun really started.  Hamilton’s coach,Doug Spencer of Spencer Golf Academy, teaches one of the top women amateur golfers in the world, Caley Mcginty. She’s from Bristol, England and she was invited to play in the Augusta National Women’s Amateur which two rounds are held at Champions Retreat Golf Club in Evans, Georgia and the final round is held at the Augusta National Golf Club the day before Drive, Chip and Putt.

Caley came down to our new home in Martinez, GA to stay with us and play a practice round at Champions Retreat.  Hamilton played in a fivesome with his friend Papa Joe (91), John (61), Caley (21) and Olivia (21)from the Augusta University Women’s Golf Team and what a day it was! It was cold and rainy but there was 1 amazing golf shot after another one from everyone and Hamilton had such a great time.

Later that evening, Papa Joe and GeeGee threw a party for both Caley and Hamilton and we celebrated with my Dad and many great friends from the area. Papa Joe read a poem he wrote from the two great achievements from Hamilton and Caley, and Hamilton’s brother Jackson led a prayer asking for them to do well in their tournaments. It was the perfect end to a perfect day.

The week before Drive, Chip and Putt

The following week, a few days before Drive, Chip and Putt, Caley came down and played in the Augusta Women’s Amateur and she played so well.  It was great to watch her compete against the best amateurs in the world.  She made the cut and played in the finals at Augusta National and was paired with the number one player in the world, Rose Zang.  Caley ended up finishing tied for 12th.

On Friday Hamilton had a putting lesson with Doug and then Doug and Hamilton played at our home course at West Lake Country Club along with Doug’s wife, Tracy and the retired Ohio State Women’s golf coach, Therese Hession.  They were having the time of their lives and were playing great.  Hamilton and Doug played all the way back.

One the hardest hole on the golf course, Hamilton chipped in for birdie, then as we were walking up to the 17th hole we were talking about how Hamilton and I have never had a hole in one and how great it would be for Hamilton to hit one.  The very moment we were talking about it, Hamilton stripes a 5 iron from 160 yards, into the wind right toward the flag.  Hamilton then starts running down towards the hole. When he finally gets to where we could see the flag, he tosses the club up in the air and we were all screaming and videoing this great moment when we realized he had made his first hole in one!  Hamilton said, “Even if I blow it at Augusta National, at least I got a hole in one with some amazing people!”  What a day.

The day before – the excitement is building

The next day, we threw a nice party for Hamilton at our new home and the local news station came by to interview him and his buddy Zane (who had also qualified for DCP).  We had the best time hanging out with so many great friends and family on a perfect Saturday.  The food was prepared by my wife Sara and it was delicious (including her famous pimento cheese).  She’s going to share more recipes she used that day, so stay tuned.

On a side note, since qualifying in September, Hamilton has learned a lot about speaking in front of the camera.  He has had many interviews and segments on him leading up to the finals.  He has gotten better every time, especially from the first interview he gave.  The first time he had an interview he was so nervous, the person conducting the interview could barely hear him and he was almost shaking.  The interviews I saw after the Drive, Chip and Putt finals, he sounded like a professional (of course I’m biased).  If there is anything he has learned, I am most proud of how he conducted himself and how well spoken he is from this great experience.

You can see an interview the Golf Channel conducted of the three local Augusta contestants, including Hamilton, here. It’s so fun to watch these kids!

After the party we went down to the Augusta Marriott where all the DCP national finalists had pictures taken and then we got to meet Mike Torico from the Golf Channel and Nancy Lopez (one of the greatest female golfers of all time) during a nice reception thrown for the finalists.

It was really hard to sleep for me on Saturday night.  I couldn’t stop thinking about all the hard work Hamilton has put in and how great it was going to be to ride down Magnolia Lane with my family.  To think we get to do this because of what Hamilton has achieved is mind blowing.

The Drive, Chip and Putt national finals are finally here

As we were eating breakfast the next morning, I couldn’t stop smiling.  Hamilton has achieved so much in his short life and I can’t express enough how proud I am of him as a person. We were so excited to get to experience this as a family.

The first of many amazing experiences was how we got to ride down Magnolia Lane together.  Hamilton truly adores his family and the ride was so special with everyone together.

As we were walking into where the driving portion took place, I could see familiar faces all over the crowd.  I had no clue of the impact the crowd had on Hamilton and how many friends and family came to watch him and the other kids.

While we were waiting for Hamilton’s turn to go, we talked to the other participants to the left and right of us and it was so cool to talk with people who are just like us but lived all over the country.  Then the announcer said over the speakers, “And from Augusta, Georgia, HAMILTON COLEMAN!”  There was a pause as Hamilton took two steps and at that moment, the crowd erupted with screams, yells and applause. Hamilton smiled from ear to ear.  Even the Golf Channel highlighted this in a segment they produced afterwards, which you can see here. You can imagine how great that made Hamilton feel.

Before Hamilton’s name was called, we said a prayer together, which is what we always do prior to a competition. I was struck by how calm he was and I was thankful he was enjoying the moment and soaking everything in.

As he swung for his first drive, he leaned a little to the left like he had pulled it— but it stayed in.  The crowd got even louder when they announced that his drive went 232.5 yards and now he was in the lead.  The next drive looked even better, and as he walked back, the crowd was going nuts and then he lifted up his hand to say thank you.  It was a wonderful moment in which I had a few tears and a perma-grin. Hamilton was off to a great start and won the driving competition.

The rest of the competition was more of the same in cheers but didn’t go his way in the putting and chipping portion.  He had one chip roll too far and a putt that would not stop rolling.  He said he was disappointed with his 4th place overall but he said it was the best day of his life.

Augusta National hosted the entire family in a way we could have never imagined. From the lunch in the clubhouse to the amazing staff that walked us through each event, it was a one-of-a-kind experience we still can’t believe we had.

Getting ready for the next Drive, Chip and Putt

Overall, I think participating in DCP has fueled Hamilton to want it even more.  I can see him working harder and I believe he will have a great year in his tournaments, and life in general.  He is turning into a great person who believes in the Lord, loves his family and happens to be a great golfer. He’s also inspired other kids along the way, and now his brother and sister want to compete in DCP and try to earn their own ticket to Augusta for next year. No matter what the future holds, this was a weekend we will never forget.