Getting Your Kids on the Golf Course 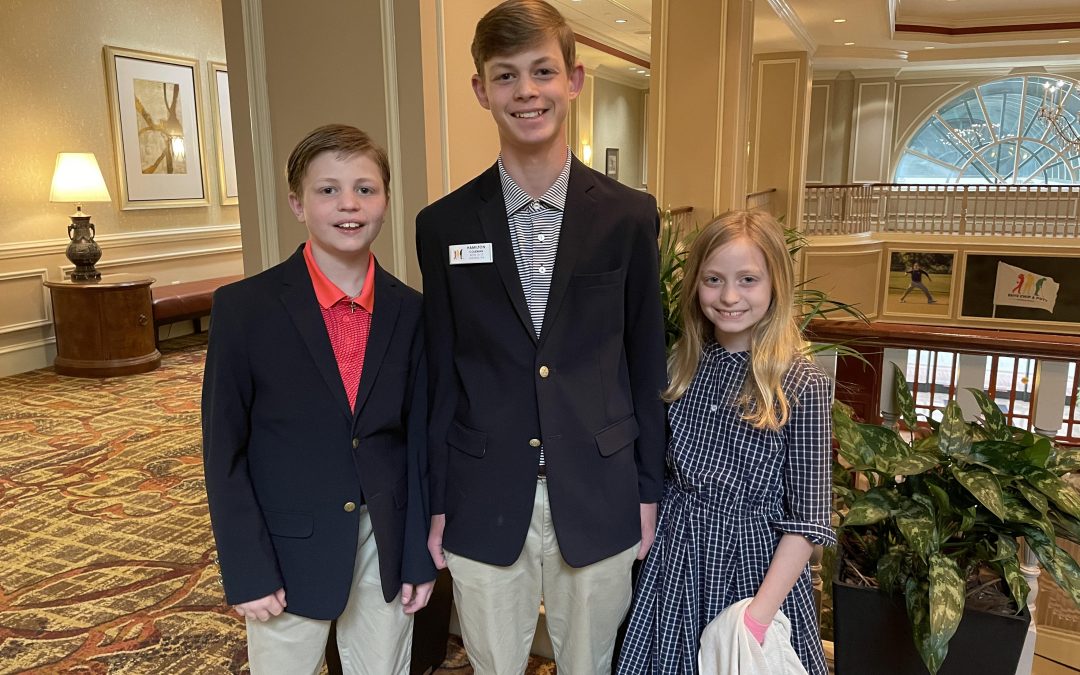 Golf has been a part of my life since I can remember, which is why getting the kids out on the golf course is so important to me.  When I was a younger playing golf was a great way to spend more time with my dad.  As I got older, I played a lot of golf with my friends, and to this day the golf course is the place I love to be.

High School was when my love for the game grew to new heights.  I was in boarding school and a great friend of mine, Justin Tupper, came to me and asked if I could quit basketball to help form a golf team.  This was not a hard decision because he and I got along so well and I liked golf a lot more than basketball. From that point on, we played golf four to five times a week.

The love for the game has carried on throughout college, in my marriage to my amazing wife Sara, and now I have passed it on to my children. Today I want to share with you how each person in my family has made golf some part of their own life.

When I met Sara, I let her know that golf was a huge part of my life.  I even bought her a set of clubs and took her to the driving range.  At one point I got Sara hitting balls and wanting to go out on the golf course.  I quickly discovered her main reason for loving golf was how she got to buy new clothes, so her interest in playing was short-lived.  The first time I took her to the Masters, she was instantly hooked.  She wanted to learn more about all the PGA Tour Pros and even started watching the Golf Channel.

Along comes a junior golfer

When Hamilton was born, she stopped playing because of our schedules, but kept up with what was going on with professional golf.  I knew I wanted to teach him all about the game.  He instantly fell in love with golf and would carry his plastic clubs everywhere he went. When he was 7 years of age, I had heard a little bit about the PGA Junior program where participants could be on a team, and they would compete against other teams.  It is a great way for children to get introduced into the game.  I looked up on the website and saw there was a team nearby so I called the coach of that team, Wes Jones.

Wes let me know the PGA Junior was so popular and there was a waiting list, but he was also Director of the local U.S. Kids tour.  I had only heard of the U.S. Kids golf clubs, so he filled me in on the U.S. Kids Tournaments.  I was a very proud father and I let him know Hamilton was shooting in the low 90’s at that time.  Wes then let me know there were kids shooting scores all over the map such as 60’s, 50’s, 40’s and then he said 30’s.  I was shocked kids were shooting that low.  I will never forget what Wes told me next.  He said, “When playing tournament golf, go ahead and add 5 to 10 shots to tournament rounds.” He was right!

The start of tournament golf

Hamilton’s first US Kids tournament was my most memorable tournament Hamilton has ever played.  It was held at Tega Cay Golf Club in Tega Cay, South Carolina.  It was over 100 degrees and we had 1 bottle of water.  I got a cart and from the first hole I knew it was going to be a long day.  Hamilton was so nervous; he was shaking and the two kids we were playing with were shockingly good.  We got to the 3rd hole and I saw Hamilton chugging all the water that was in the one bottle we had.  As I looked at the two other carts in our group, they each had huge coolers dripping with ice cold water.  I began to get really thirsty.  We finished the round and Hamilton got 3rd place out of 3 participants and I looked at him and asked how he liked it.  He looked at me with those blue eyes and said, “That was AWESOME!  Can we come back next week?”  That season he shot a 54, 52, 50, 45 for 9 holes in each tournament and then won the championship at Monroe Country Club with a score of 43.

Hamilton from the very beginning has loved tournament golf.  He couldn’t wait for the next big tournament out on the golf course, and I owe a lot of his passion and skills to the U.S. Kids Golf tour.  He eventually earned a spot in the U.S. Kids World Championship 4 years in a row.  His first tournament he placed 97th, 66th his second year, 35th his 3rd year and 13th his 4th and final year.  This was always a week he looked forward to and he always worked hard to qualify for it.  I think U.S. Kids is absolute the best experience for children 12 years old and younger.

When your kids don’t love golf the way you do

Whereas Hamilton seemed born to love tournament golf, we’ve had an entirely different experience with my other son Jackson. Jackson was more interested in getting the jersey that came with each sport.  I started teaching Jackson the fundamentals of golf at a young age, but he was really into goofing off.  That was fine with me, as I know he is different than Hamilton.  I never wanted to push my children into anything, but I have always let them know I want them to do something to stay active.

Jackson eventually showed interest in the golf because of his older brother Hamilton.  I put him in First Tee tournaments and he did really well, but I did notice he had a little temper when he couldn’t hit the ball the way he wanted.  I am pretty sure that came from him wanting to be like Hamilton.  I then put him in PGA Junior team event at Northstone Country Club in Huntersville, NC.  He became really angry during the first match he had but after I explained to him I would take away his uniform he made a conscious effort to not lose his cool.  Once we got through that he then began to look forward to each of his matches and he played great.

Jackson learned a lot from his PGA Junior experience.  He met several friends and learned a ton about the game.  At the end of Summer all he wanted to do is play tackle football, so his focus switched.  I always asked if he wanted to go to the golf course and occasionally he would join us.

Our daughter Caroline, who is 3 years younger than Jackson, wants to be included in everything. She showed a little interest in golf but was mainly into getting new clothes and hanging out with Hamilton and me (just like her Mom).  I finally got Caroline a lesson with Hamilton’s golf teacher and she started to learn how to hit the ball in the air.

Making friends along the way

Fast forward a few years and in 2021 we moved back to my hometown of Augusta, Ga. Jackson played football this Fall and when it was over, I let him know that he needed to do something to meet people, so he asked about golf. I was glad to get him back out there and agreed to get him a lesson with a local pro.  After his lesson, he showed interest in golf again and has said he wants to play golf in High School.  I’ve learned when we go to the driving range, I let him hit golf ball by himself.  If he needs help, I will help him but, I don’t want to push him to where he doesn’t want to play golf.  He has gotten better over the last few months.  He also said that he wants to just play for fun with his friends and family, which is exactly what we want for any of our kids.  I am fine with this as I want Jackson to get as much as I do on the golf course.

Recently Caroline let me know that she wanted to meet more people in the neighborhood.  I had met a couple who have twin daughters the same age as her and now we all meet over at the golf course.  When we took Caroline over to meet the twins, Caroline started to love golf for the social aspect and has become such great friends with them.  Caroline has had group lessons and played 5 holes with them.  Last week she asked me to get her a new set of purple U.S. KID’s golf clubs and since she got those, she has been going to the course a lot lately.

Keep introducing fun days at the golf course to your kids

Golf is such a huge part of my life.  I love the game and everything that comes with it.  There have been many life lessons I have learned on the golf course.  Now my children have learned to love the game.  Of course, as each child is different, their level of passion for golf is different.  Hamilton has excelled in many sports but is now only focused on large competitive junior tournaments.  Here really wants to play on at a large college and on to the PGA tour.  Jackson loves football but also wants to play golf in High School and with friends.  Caroline is new to the sport but her love for the golf is growing quickly because she gets to hang out with amazing friends.  Golf is absolutely the greatest sports on the planet and I hope you or your family has a chance to experience it too.